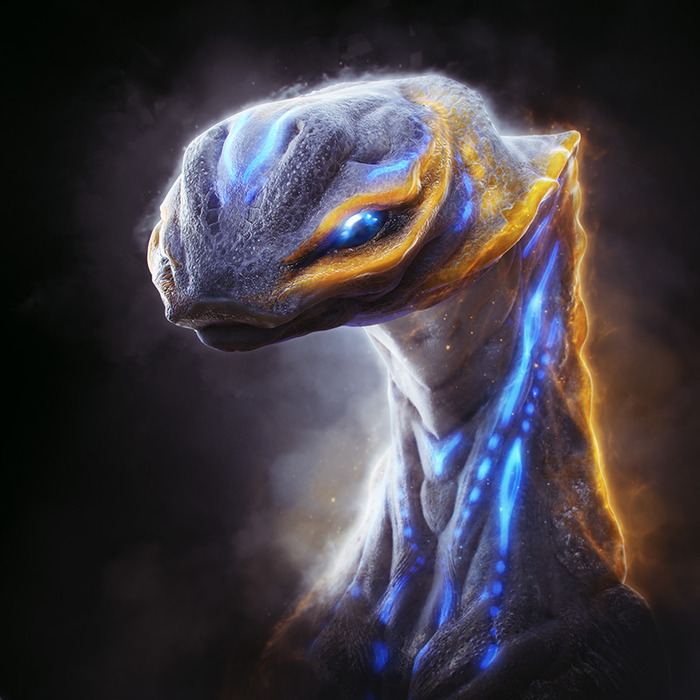 It was written in the Holy Matrix of Creation:

Thou shalt share what has been given to thee…

Peaceful creatures, the Trian race became the most enlightened civilization in the known galaxy, garnering respect and admiration from all other races. They were ancient pilgrims, spreading knowledge and technology in every corner of the galaxy.

But at the height of their powers, this ancient race embarked on a journey, carrying on an everlasting mission and sending forth a mighty armada into the stars. They left behind their technology, leaving their cities abandoned as they began their pilgrimage.

And now, deserted and unprotected, the remnants of the Trian civilization stand ready for those willing to take the ancient race’s technology for themselves. The lesser races, which once would never dare trespass into Trian space, begin their slow and dangerous exploration of the Trian’s corner of the galaxy.

Quuylto – is a race of aquatic beings worshipping science and science experiments. These little and curious creatures love gadgets and all technological innovations. They live under the surface of ice-bound planet. Trian galaxy is a one of a kind chance to study new technologies and artifacts of this marvelous civilization. Using their cunning and technological inventions they will deceive the rivals. For this purpose they use camouflage and holographic images of their spaceships.

Technology is a melody of a triumph…

K’Harguar – is a race living on a planet overgrown with dense, preternaturally huge jungle. These winged and agile creatures created their cities in the crowns of trees, which give shelter to billions of creatures. Their civilization is based on unique abilities to create biological constructions. Thanks to their collective abilities, they are able to create everything using the living matter, including weapons and spaceships. In combat they take advantage of their numbers and regenerative abilities of their biological ships.

Anything that lives can kill you…

Xemh – it is a race known for its brutality and intransigence which strikes terror among other civilizations. These insectoid beings attack and plunder planets bustling with life. In result they leave exploited and destroyed deserted environment in which they feel best. Any negotiations are a weakness, which their rapacious character doesn’t allow. Their warships are heavily armed machines sowing fear in the Galaxy.

Attack is the only solution…

Borf-Naree – believe that everything can be bought and sold, and collecting valuable resources is the most important objective. These crafty and charismatic traders know how and where to make a fortune. In business they use various tricks and ploys to achieve set goals. Their spaceships are heavily armored freighters, constructed in a modular way with the purpose of adding further hangars and holds. At their disposal they have unique shields absorbing energy charges, which result from the attack of an enemy or cosmic anomalies. This race doesn’t attack other civilizations but simply buys them.

Everyone has their price….

Sslyx – the race of ruthless bounty hunters and mercenaries, working for the one who pays the most. Establishing cooperation with them is bound to a great risk. This race lives on the planets seized with deception or “abandoned” by their native inhabitants. Thanks to their adaptive abilities, their organisms can adapt to the conditions existing on majority of planets. In fight, they use chemical weapons and all kinds of mass destruction weaponry. Their light-armored, maneuverable ships are equipped with long-range rocket systems and wide-range self-destruction systems. In one word, these ships are flying bombs. Their fleet is composed with single units, which destruction is associated with great danger.
…. Sign the contract and pray for your life….

Arvori – the peaceful, long-living race. Individuals of this race absorb food through the pores in their skin layers. They process the smallest particles of energy into the substances essential to live. They spend most of their time on worshipping their gods, which they consider the Trian race. Thanks to meditation, they increase the body’s ability to regenerate. Where the Trian race arrives, soon Arvori follows, coming after their gods, to thank them for their gifts. They can survive in any environment, provided there is only a touch of energy in the atmosphere. Their ships are equipped with energy absorbing systems. Harnessing the energy from the environment gives them the unlimited source of power. They use this technology in fight to harness the energy of their enemies and immobilize their units. Arvori do not execute their enemies, only uses their chances to retreat.
…. Meditation and prayers are everything you need….

The time for exploration and conquest has come in the galaxy of Trian. Take over the command of one of the races and win…